This ONE THING Helped Me Draw *Almost* Every Day 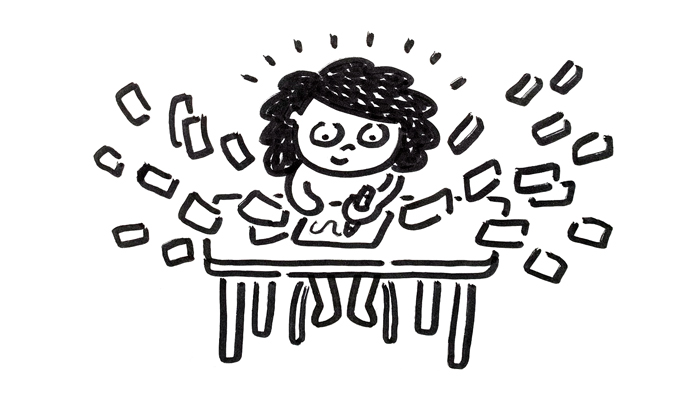 Last year, on the bright, shining morning of January 1, waking up in a comfy, warm bed in the North Carolina mountains, with the renewed sense of power and hope that comes on New Year’s Day, I declared my resolution for 2017: “THIS is the year. This is the year I will draw every single day.”

It’s now the beginning of 2018, and *spoiler alert* I didn’t fulfill that resolution. I didn’t draw every day of 2017. There were about 10 days I didn’t draw, so I drew somewhere around 355 days last year. Another failed resolution. Another hopeless year, another waste, right?

Actually, I believe my 2017 resolution was far from a failure. I believe it was a huge success. I drew 355 days! That’s more than I’ve ever drawn in a single year. I filled up 3 entire sketchbooks. That’s more sketchbooks than I’ve ever filled up before! I tried out new tools and mediums, and evolved my artistic style into something that feels even more like me than before, even when I thought I had already figured it out!

So yeah, if you wanna get all technical and nitpicky, I didn’t achieve my goal. Fine, whatever, another New Year’s resolution in the graveyard. But here’s the important part: that failed resolution led me to draw more than I ever have before. I succeeded in the long run by improving my creative life and growing my artistic practice.

Now at the start of this fresh new year, I’m reflecting back, trying to figure out why I was more successful in 2017 than 2016. And that’s when I discovered the one thing that helped me draw *almost* every day last year.

Commit to a Drawing Series Publicly

Drawing *almost* every day for a year is a long time. We’ll start out strong for sure, full of ideas and brimming with motivation. But how do we keep the momentum going?

The most common thing I hear from people who don’t draw consistently is that they just don’t know what to draw each day. They sit down with the intention of drawing, but they open up their sketchbook and the blank page just stares at them. So open, so white, so BLANK. What to possibly fill it with?

Here’s my secret weapon to combating this problem: committing publicly to drawing projects and series.

This came in many forms for me, but most often was some sort of drawing challenge or theme on Instagram. I started or participated in a total of 12 drawing series last year. Some were personal series I started myself, like my travel journals, and some were drawing challenges started by other artists and joined in by thousands of other creatives.

Here are the drawing projects I committed to publicly last year:

I stuck with some of these series from beginning to end, like my travel journals and Inktober. Others, I started with high energy, but soon the excitement wore off and I lost interest and got bored. So I stopped that series. But that doesn’t mean that series was a waste of time! It was still worth it to start the series, even if you only did it a couple times. It got you drawing that day and that’s what counts. We want to enjoy the process of drawing, so don’t keep drawing a series if you start to hate it. Turn the page, and start a new series!

In total, these 12 series produced 185 total drawings. That’s almost half the year, right there! All because of a bunch of random drawing series I decided to commit to and see where they went. Some went somewhere interesting, some didn’t. But they all got me drawing.

Why Does This Work?

So why does committing publicly to drawing series work? Why not just draw something different each day? Why not keep your drawing series secret? This concept works for three reasons:

1. You’ve given yourself constraints

Now when you sit down to draw, you won’t be as confused or overwhelmed about what to draw. You’ll have a set of limitations to work within and a direction to follow. These guidelines help to jumpstart new ideas by narrowing down the options, rather than sitting down to a blank page with limitless possibilities.

2. You’ve made it public and held yourself accountable

When you make your drawing series public (by announcing it on Instagram or Facebook, for example) you’ve declared your intentions to the whole world. Now if you don’t draw, you won’t be the only one who knows it. This boost of accountability will be an extra layer of motivation for you to draw each day.

3. You’ve opened yourself up for feedback and joined a creative community

Whenever you push something out into the world, you’re opening yourself up for feedback. This may be a scary at first, and I can’t promise no one will say something negative about your work. But in my experience, the internet environment I’ve shaped and molded for myself has been very nurturing, inspiring, and supportive. You can create that environment too by choosing which groups you join and who you follow. Join a positive and open creative community, and their feedback and encouragement will help keep you motivated.

Ok, so we made the resolution to draw every day with all the determination we could muster and all the good intentions in the world. We committed to a bunch of drawing series publicly. We gave ourselves constraints, held ourselves accountable, and joined a creative community. But here we are on January 9th, and we’ve already missed a day. Curses!

Here’s the real secret to drawing consistently: Who cares?! You didn’t draw yesterday, you missed one day. Ok, so what? That was yesterday, and today is today. We can’t let one slip up bring this whole thing crashing down. It’s pretty much guaranteed that you will slip up. I already have! For real. I forgot to draw on January 6th. Oops.

It’s ok. No one is perfect. We all make mistakes. Consistency is what we’re really aiming for, and we can keep it up by forgetting the tiny missteps and focusing on the big picture. Yes, we forgot to draw yesterday. We can’t go back, and we can’t change that. But today is a new day with fresh promise and the opportunity to rebound.

We can still draw today.