Last week I talked about how I used to be in a rut where I would kept trying so hard to cook the BEST food and draw the BEST art. It ended up always backfiring and stressing me out, and leaving me with a overcomplicated dish, a stiff drawing, and a whole lotta clean up. But then I switched to a more sprezzatura mindset, which allowed me to loosen up, relax, and start loving and enjoying cooking and drawing again!

So, are you curious what sprezzatura really is and want some actionable steps to apply it to your art? Let’s get to it!

I first read the word sprezzatura in a New York Times article about James Richardson, the host of a soccer podcast. Here’s the snippet that lit up my mind:

Given all these deviations from the norm, it might be tempting to call Richardson an anti-pundit, but that sounds altogether too effortful for a man who embodies the ideal of sprezzatura. “Pundit-satirist” might be nearer the mark, for Richardson’s distinct charm lies in his recognition of the inherent absurdity of what he does for a living.

Most people who get paid to talk about soccer in public — to trot out the old chestnuts about players taking their chances and giving 110 percent — deliver their opinions in a tone pitched somewhere between that of an irascible headmaster and a time-strapped auctioneer. Richardson, by contrast, speaks with the breezy spontaneity of someone who knows that nothing, or nothing more serious than entertainment, is really at stake. –Giles Harvey, NY Times writer

To be honest, when I read that, I had no idea what Sprezzatura meant. But I was immediately interested in both the word—what a wonderful sounding word!—and what it could really mean. I felt like this snippet was talking about me.

Yes, I was being “altogether too effortful” in my cooking and drawing. I was trying way too hard, and it was making me tense up and stress out.

Yes, I was failing to recognize the “inherent absurdity” of what I was doing. Let’s be real: I’m just drawing lines on paper, and I’m just heating up things that grow in the dirt.

Yes, I had forgotten “that nothing more serious than entertainment is really at stake.” I’m not defusing a bomb, and lives are not at stake, so why am I gritting my teeth so hard?!

And that was all it took. I was hooked on this word sprezzatura, before I even knew what it really was. Upon conducting a deep-dive research analysis (I googled it), I found the following definition:

“Sprezzatura: studied carelessness, especially as a characteristic quality or style of art or literature.” 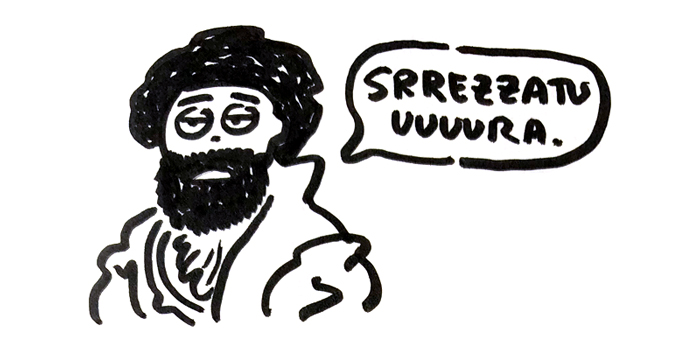 The Italian word first popped up in The Book of the Courtier by Baldassare Castiglione in 1528. Castiglione used it to mean:

“a certain nonchalance, so as to conceal all art and make whatever one does or says appear to be without effort and almost without any thought about it.”

In short: sprezzatura means doing something difficult and making it look easy.

So now I’m even more intrigued with this sprezzatura and it’s effortless efforts. The word stuck with me and marinated in my mind.

A few days later, I read another New York Times article, this one about “effortless and delicious recipes you can make in less than an hour.” The column talked about Alison Roman’s “approach to cooking, with dishes, like this sheet-pan trout, that look impressive, but require less time than you’d think.”

There was that idea again: sprezzatura. It looks impressive and difficult, but is actually quite effortless. A whole roasted fish! How impressive! But also how simple…

The author spoke of her mother’s cooking and how impressed she always was with her mother’s meals. It wasn’t until she was older that she realized how simple and easy those recipes had actually been. They had looked complicated, but were actually quite simple. The realization led her to rethink and recalibrate her own cooking style.

“I’d like to think she passed on that low-key cleverness to me, and that it shaped my approach to home cooking, which can generally be summed up as “Looks Impressive” (capital “I”), but requires less effort and time than you’d imagine, with fewer ingredients, too. The style I’ve cultivated has led to my being called an unfussy cook — which I take as a huge compliment.” –Alison Roman, cook + writer

And that was when I began to tie all these disparate threads together. I realized my art and my cooking had both gone through drastic changes over the past few years. I had moved on from over-complicated, finicky dinners and artworks, to simple, unfussy food and art. And adopting a sprezzatura mindset is what allowed me to make that change. 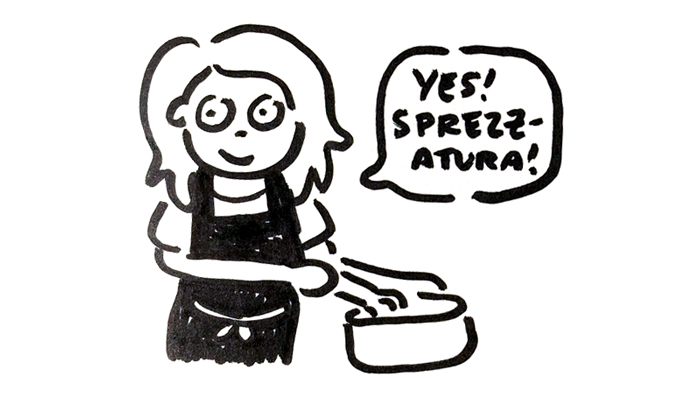 I began throwing caution to the wind when it came to technique. I mashed up some leftover lentils with leftover beets into little patties and fried them up just to see what it would be like (it was good). I stopped sketching out my illustrations in pencil, and started just going for it in pen, to try to capture a more spontaneous, lively feel. I started prioritizing uniqueness and simplicity over trying to find perfection.

What I’ve learned (over years of drawing and cooking) is that you can make something impressive, successful, and “good” without hours of stress, the most expensive tools and ingredients, and a never-ending list of steps and techniques. You can tap into a sprezzatura mindset, chill out, stop stressing, and make better art.

To bring back the lasagna metaphor from Part 1: You can make the best lasagna. Or you can make your lasagna.

“To me, unfussy doesn’t mean boring — it means approachable and accessible. It means getting dinner on the table with ingredients that are simultaneously inexpensive and interesting, treating them in a mix of new and familiar ways and doing it in less time than it takes to start a new series on Netflix.” –Alison Roman, cook + writer

Some days you might want to go for a big, long, impressive project—I love occasionally spending an entire Sunday afternoon cooking dinner. But my realization is that it’s not necessary to make a lasagna from scratch EVERY time you want to cook.

And likewise, it’s not necessary to make a full-scale, gallery-ready painting EVERY time you want to make art. You can make something approachable, accessible, quick, and not at all boring.

It may not be the best.

And it will definitely not be perfect.

But it will be mine. And it will have soul.

A soulful lasagna—in my mind—will always beat out a technically made, machine-perfect, highly engineered, frozen lasagna. Think about your Grandma’s lasagna. Was her lasagna perfect? Was her lasagna Zagat rated? Was her lasagna created with organic, expensive tomatoes imported from Italy? If your Grandma was anything like my Grandma, there wasn’t a recipe, nothing was measured. Her food wasn’t perfect, but everything she made was cooked with love. And it was the most comforting food in the world.

If you’re clenching your jaw and stressing out, that feeling shows through in your cooking and your art making. If you enjoy the process, and love the act, that soul shows through, in both art and food.

Why does everyone think their grandma’s less-than-perfect lasagna tastes better than the frozen kind?

One is technically perfect, and one has soul.

Which do you prefer? 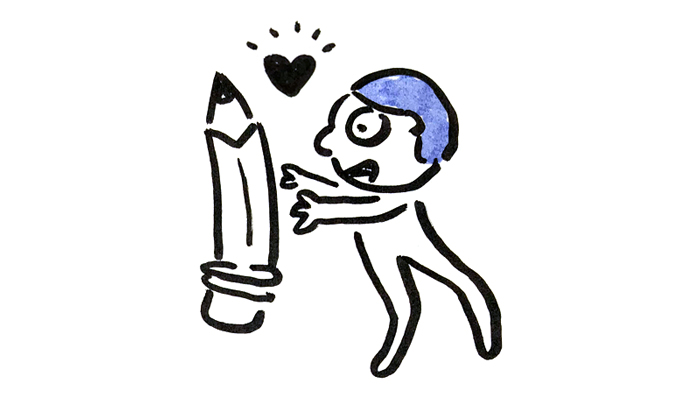 7 Actionable Ways to Embrace Sprezzatura in Your Art

“With my freckles and messy hair, bruised knee and chapped lips—this morning I am splendidly imperfect and alive. Another bath it will be.” –Sabrina Ward Harrison, artist