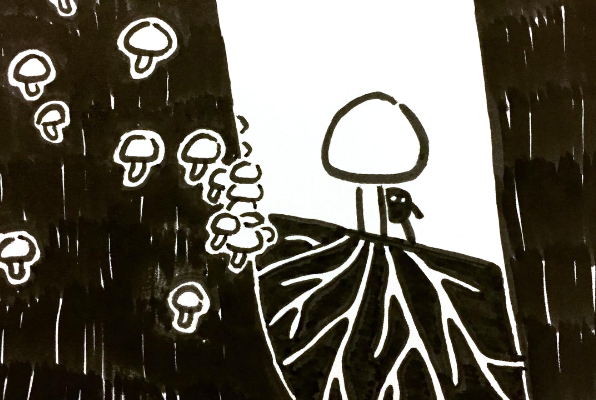 From Mass Media to Niche Markets

Have you noticed that mass media seems to be dwindling? It used to be that everyone generally watched relatively the same TV shows, listened to the same music, and watched the same movies. Every Monday morning at school or work was some gist of:

“Did you see thingamabob movie on Friday?”

Recently, the amount of media available has made mass media sprawl out more, to the point that it’s not quite so mass any more. Sure there are still blockbusters like Girl on a Train and the likes that break out. But it’s happening less and less frequently. More often, we’re getting way more smaller market, niche products.

“Did you see that documentary about sommeliers on Netflix?”

So now, the media industry as a whole is having to adapt to this new product economy. Historically, the media world — including book publishing — was a commercial hit-driven business. Publishers make most of their profit from just a few of the books they produced. For every blockbuster hit like Harry Potter, there are hundreds of books that fizzled out and never got discovered by the people who would love them most.

A commercial hit is by definition something that will appeal to a wide audience. This is what most publishers aspire to acquire and create, because the money they make from the hits covers the costs of all the fizzled out books that never quite make it.

But now, with the internet, the market is able to support way more content and a more diverse range of content, from mass-appeal books all the way down to books made for specific niche groups.

This concept was coined by Chris Anderson, a writer and entrepreneur, who called the theory, “the long tail”. He originally wrote an article about the topic, and later expanded it into a book in 2006.

Anderson argues that the “big commercial hit is dead”, and predicted that businesses would get most of their profit in the future from a long tail of niche products, catered to individual customer needs instead of a wide audience. 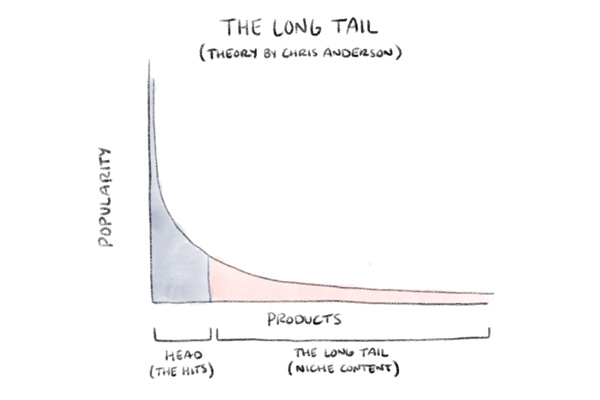 In this graph (drawn from Anderson’s book), the peak at the front of the graph represents the commercial hits. The best-selling books, multi-platinum records, and blockbuster movies. Your Harry Potters, Lady Gagas, and Batmans.

The long, short side of the graph shows the niche products. These products don’t sell nearly as much as the hits, but when looked at together as a group, they can potentially grab a substantial portion of the market. This part of the graph is called the long tail and includes all types of products, from self-published niche books, indie films, indie comics, youtube videos, zines, limited release books, blogs, and other small-scale products.

Anyone Can Be a Maker

The long tail’s growth is due to two major changes in our world. First, the means of production are now available to everyone.

Making things is easier now than ever before.

But people have always been able to create art and products. It’s only this factor in combination with the second change that makes the long tail possible: the internet has allowed for access to distribution.

So now, not only are the tools of creation available to everyone, but we now have a way to get them out into the world on our own.

You don’t need a publisher or a record producer to have access to distribution anymore.

The barrier of entry for producing and distributing products has gotten lower and lower, which makes the tail get longer and fatter as more products are added everyday.

The Popularity of Niche Products

Niche products used to be impossible to find. Imagine going to your local bookstore and trying to find a specific book on the history of chess. It’s doubtful they’ll have it in stock, or even have heard of it. But go to an online aggregator today — like Amazon — and you’ll have 20 pages of books on the history of chess to choose from instantly.

The publishing industry, like all industries, is going through a lot of big changes. They’re having to adapt to this new internet world, a slew of new makers, and more buying power in niche markets.

I believe books specifically are poised to be a leader in this category of niche markets and the maker revolution. Making a book is an enlightening and empowering experience.

Making a book is a way to embrace your niche interests and share what you do with others, contributing to the overall community within that niche.

One of my major ambitions for the future is to encourage and empower more people to make more books on the topics they’re passionate about. Whether you want to sell your book, give it out to a small audience, or just make it for yourself — making a book is a valuable and fulfilling experience and an art form that is relatable and achievable for everyone.

So the question now is: What can I do that they can’t? I’m a just girl with a computer, sitting on my bed, with my dog sleeping at my feet, and my husband coding by my side.

What can I do now, that those huge companies can’t?

They can make more money than me, reach wider audiences than me, put on bigger marketing campaigns than me, and garner more attention from the press, media, and reviewers.

But there are certainly things I can do that they can’t.

I can make things fast. I can fail fast, pick myself up and try again. I can put stuff out there and see what sticks. I can follow my niche interests and passions. I can connect with my readers. I can collaborate and contribute to my niche market. I can go in any direction I want. I can make books on my own timeline, without having to wait. I can get feedback directly from my readers. I can involve my readers in my process.

I can open up everything.

I can become completely transparent.

That’s something a huge corporation cannot and will not do. It’s too risky.

But I can do it. Because it’s just me here, sitting on my bed.

So c’mon, let’s not only read and support more weird books. 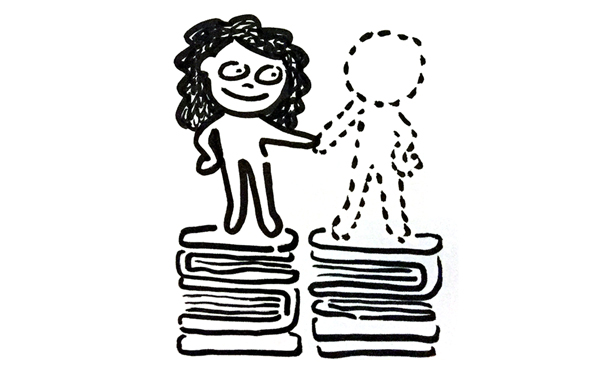 P.S. Next week I’ll finally be announcing this thing I’ve got up my sleeve. It’s about my book, We Are Fungi, but it’s also bigger than that. It’s about being makers. It’s about embracing our creativity. It’s about challenging that big narrow peak, from down here in the niche trenches. Sign up for my newsletter with the form below to hear more next week! :)