I was a pretty shy and quiet kid. My older sister was talkative and outspoken, and I was happy to let her take the lead and speak for both of us most of the time. In home videos of us as children, you can hear my parents asking my sister to stop speaking for just a minute so I can say something to the camera too, as the frame zooms in on my face in the background and I whisper-sing an incoherent song.

By elementary school I developed some sort of speech articulation problem. I had trouble producing certain sounds like the letters R, S, and G. My parents enrolled me in speech therapy to correct whatever weird things my lips and tongue were doing.

A short time later, I graduated out of speech therapy—I learned how to override my articulation tendencies. I can accurately produce R’s, S’s, and G’s and I can properly enunciate my words. If you’ve taken any of my online courses you probably wouldn’t have guessed I ever had any speech issues (although you may notice my southern twang). I’m able to speak for myself, stand up for myself, and I can speak clearly when I have to.

Key word: HAVE to.

The thing is, those tendencies are still inside my brain, and it still (at 30 years old) takes a lot of mental effort for me not to slip up, each and every time I speak. When I’m making my online courses I rewrite phrases and switch out words to avoid difficult pronunciations, and I’m exhausted after recording audio from focusing so hard on enunciating. My husband and I really like a certain name for our new baby that starts with R, but I’m worried I’ll have to focus too hard every time I say my child’s name, and will most likely end up mispronouncing it all the time.

This extra energy use also means I tend to speak only when I feel I have something important or meaningful to say. I don’t enjoy talking just for talking’s sake, and I tend to avoid speaking in situations when a non-verbal option is available. I will always choose emails or texts over phone calls, and growing up in the era of AOL Instant Messenger rather than teenage phone calls was a stroke of luck for me.

In casual conversation with people I’m extremely comfortable with, like my husband or immediate family, I often don’t put in the extra effort required to speak clearly. I simply don’t have the energy to do it constantly, and when I feel comfortable enough, I choose to spend that energy on other things. This leads to mumbling, slurring words, speaking quietly, or saying only the important things. In these moments, I’m choosing to use my natural voice.

What does all this have to do with art and creativity? Well, I believe there is a direct correlation between my spoken voice and my creative voice.

I remember drawing since I was very young (as most kids do), but I began to ramp it up, drawing for hours at a time, in middle school. Middle school is a pivotal point in a child’s life. It’s when you become hyperaware of your identity, other people’s identities, and how yours fits in (or doesn’t) with theirs. It’s when we begin to really discover and develop our individuality. It’s when we discover our voice.

But my voice was quiet and mumbly, and just so tiring to produce. How could I clearly and continually express my individuality with such a voice? Could I express myself non-verbally?

A Pathway to Connection and Expression

Initially, this was a subconscious realization. All I knew initially was that I liked drawing pages and pages of Pokemon. But over time, I began to branch out, drawing the things I saw around me, observing, recording, and expressing my thoughts. And over time, I began showing those thoughts to others. Just as someone would do vocally in conversation. I was learning to communicate in a new way with paper and pen. I was honing my creative voice and learning to communicate through art.

What I’ve realized now, as an adult with the ability to reflect and theorize, is that my inadequacies and difficulty in verbal speaking encouraged my interest in learning to draw. My speech problems didn’t make me better at drawing, but it made me put more effort into it. It made it felt more important and vital—I needed a better way to communicate. Drawing was a pathway to conversation, connection, and expression that I couldn’t have otherwise, or at least couldn’t achieve easily.

Just because I didn’t want to speak (or at least speak loudly and/or clearly) didn’t mean I didn’t have anything to say. And it didn’t mean I didn’t want to connect with others. I wanted those things desperately. I wanted to tell others what I thought and who I was, and to connect with others, but I wanted a different way to do it. Drawing to express myself became a non-verbal way to communicate and heavily influenced the way I draw today. Drawing allowed me to share my inner world with others. And it still does today.

If you were to pass me on the street in person, and ask how I was feeling or how the pregnancy is going, I would undoubtedly respond, “It’s good!” or “I’m doing fine!”. But we all know what a load of hooey the word “fine” is. It’s the easy answer, the polite answer, it’s what society encourages us to do in verbal conversation with acquaintances: keep it light, keep it positive, keep it short. Plus, I’m spending more of my mental energy on speaking clearly and enunciating than on actually analyzing how I’m feeling and communicating that out loud.

But what if we were to have that same conversation through art? We’re actually doing it right now with this essay. I’m speaking at length (look, no mumbles!) and you’re listening, then I listen and some of you speak when you reply to these essays with your own stories. We also converse through art on social media. I share my true pregnancy experience through a series of comics on Instagram, and those drawings are way more honest, truthful, and expressive than anything I’d be able to say verbally.

I’m sure some people see this as a weakness. I’m sure they’d tell me to spend more time and effort strengthening my verbal communication skills. But sometimes our weaknesses and ineptitudes lead us to where we are naturally strongest. My quiet, mumbling speaking voice led me to discover my distinct, bold artistic voice. For me, my art is how I can most clearly communicate what I really think and feel.

For me, my art is my voice.

Want to grow as an artist?

Might Could Studio’s mission is to help self-taught artists develop and grow. Want to learn more? 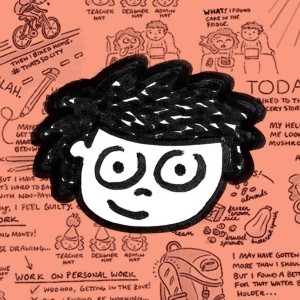 I'm the founder of Might Could Studios. I've taught over 70,000 students in my online courses, written over 90 essays on creativity, created over 2,000 drawings, and self-published my debut picture book, We Are Fungi, in 2017. I'm currently working on a four-book children's series with Scholastic—Layla and the Bots—with the first book set to debut in May. I spend my time working on picture books and running Might Could Studio's online artist community, Studiomates.
Learn More

Want to grow as an artist?

Might Could Studio’s mission is to help self-taught artists develop and grow. Want to learn more?